You are here: Home / Animal welfare and advocacy / Chopper the Biker Dog kicked out Pet Partners therapy work because of a jacket 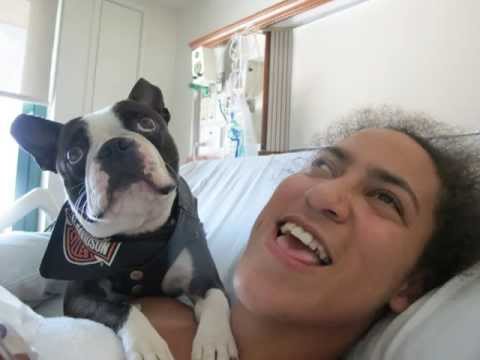 Chopper the Biker Dog is well known for his look, and also as a therapy dog. He has visited thousands of patients in hospitals, students in schools, and seniors in homes here on the West Coast. He has been doing this for five years, certified as a therapy dog through Pet Partners. You can read more about the story and Pet Partners response in this news story.

However, the entertainer was just suspended by the Pet Partners organization. Why? Because of the way he looks: his motorcycle gear.

Chopper had received a warning, but was ultimately removed from the program because of his appearance. This event raises some interesting questions about both volunteering and therapy dogs in general.

Does it ever matter what a dog wears?

Sure, it certainly can. If the purpose of the visit is to pet a dog, then what a dog wears may matter. However, not all dogs are this kind of therapy dog.

I will provide a personal example. I used to volunteer at an extended care home with Mort. I would take him around, and talk to the patients and I would have Mort perform tricks and training exercises. A lot of the interaction was between me and the patients: I would open up conversation with tricks and training, and usually this would evolve into a back and forth between me and the other person, as Mort would lie down and wait. It rarely involved direct interaction between the patient and the dog (Mort just isn’t that kind of dog, plus he was relatively “green”). But I didn’t feel this mattered: the humans got the most out of the conversation, to the point I am fairly sure they barely remembered there was a dog there. But the smiles on their faces when Mort did tricks was priceless. It, without a doubt, brought them much joy.

If I was told I could not longer do that, and needed to forego everything I did and put him on a lap while they pet him I would probably quit. That is not an organization I would want to work with. However, the facilitators were gracious and pretty much gave me free reign to do whatever I deemed best for the dog and the patients (within basic bounds of safety).

Chopper the Biker Dog is a persona

A persona means entertainment. It means engaging, talking, and performing. This brings joy to an audience. This is therapy. It doesn’t happen when you take an essential criteria away: the human feels limited, the persona is taken away, the entertainment is forever and completely changed. You lose all of what you had: the performance.

He he.. I found this picture of me being passed around on Twitter today…. but it's true

I am not sure if the Pet Partners organization only caters to the type of therapy dog where it is essential they do not wear clothing for whatever reason (being pet, I could only assume?) But if not, then I can’t fathom why it is so essential a dog does not wear clothing to provide a form of entertainment, which is very important in many facilities. It breaks boredom. It provides something to watch and discuss. It brings a worthwhile human interaction. Pet Partners has not elaborated in their statement to the press about specific reasons why they do not allow any kind of clothing. Some therapy dog organizations require teams to complete certification wearing the outfit and accessories (leash, collar, harness, etc) they will volunteer in, whatever that might be. The dog and the accessories and outfit are approved, and that’s what you can volunteer with.

Heck, ANY person willing to freely give their time in a positive way benefiting others shouldn’t be shunned and restricted and banned without valid, good reason. As long as the human and dog have something positive to offer in a safe way, why discriminate?

When should a change happen? When is being kicked out warranted?

I firmly believe the resolution should lie in the “customer”. The people who are being visited might be complaining about the dog, and in this case a change should occur. After all, if there are complaints then a volunteer probably would want to change what they’re doing to make best use of the time spent at the facility.

However, if no one is complaining and every one is benefiting, shouldn’t a rule have an exception? Couldn’t a new rule be made for “performing dogs” or the like?

It’s important to value volunteers, and work with them whenever possible to keep a positive relationship not just with the individual but with the overall organization. Volunteers talk, and scenarios like this (very public ones) can influence not just current volunteers but future ones.

At the end of the day, I’m sympathetic to those who give their time and aren’t provided a really good reason for the limitations. People who are freely giving their time should be worked with. I am a real rules follower, however I also feel rules can and should be bent or adjusted as long as it’s a positive outcome (no one is being hurt, it’s meeting a greater good, etc). If there were many complaints from those who being visited by Chopper the Biker Dog (about the presentation or interaction), then I can absolutely see trying to work together to come to a resolution. But that doesn’t seem to be the case here, and I’m at a loss regarding the reason this expulsion needed to occur.

Not surprisingly, Chopper the Biker Dog and his human are seeking certification from a different association.

See more of the work Chopper does in this video

I wanted to add that the therapy team did try to come to a resolution with Pet Partners before this news was made public. The message is within the following Facebook post. Contact information is found within the comment thread if you want to get involved.

Regarding Chopper's "registration" with Pet Partners, I want to make sure that it is known, this was not about me being…

Posted by Chopper the Biker Dog on Thursday, June 4, 2015