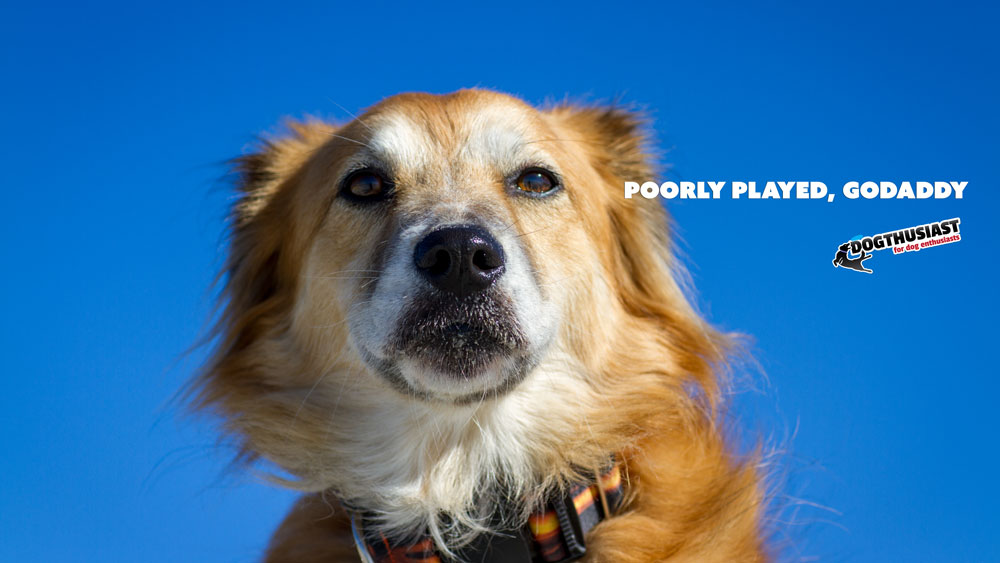 The recent GoDaddy Puppy commercial for the Super Bowl went viral for all the wrong reasons. Some might say that we shouldn’t be giving them “free advertising” but writing attention seeking blog posts, but in this case I disagree. Lets keep the spotlight on GoDaddy for a bit longer. Let more people see and understand what they tried to pull this week with their little campaign.

GoDaddy created an ad that was about a puppy riding in the back of a pickup truck (mistake one: it’s illegal in GoDaddy’s home state, and not to mention reckless endangerment of an animal). Then that puppy was lost, found, and relief was displayed because – hey! – that puppy just sold online and the inventory was lost!

So the GoDaddy puppy commercial is making light of riding in a truck bed, and internet puppy mills. It was meant to be “humorous” and as much as I do love dark humor this one was completely lost on me as it was most others. To read about why this commercial content was so irresponsible, check out this excellent post on Beagles and Bargains by Jessica Shipman.

Thank you @animalrescuers for the candid feedback. What should have been a fun and funny ad clearly missed the mark and we will not air it.

But was it really meant to be “funny” like the GoDaddy CEO claimed above? I think it’s pretty clear that humor was never the intent at all.

GoDaddy’s former CEO is well known to enjoy killing elephants, so the company is not new to controversy. Not only that, but they have been known to make thinly veiled attempts at publicity stunts in the past. Is this such a move or was it truly a bad marketing idea?

It’s always possible that the marketing team at or working for GoDaddy has a poor sense of humor. Perhaps it’s a desperate attempt at attention-seeking humor, the mark of a desperate team or company. Maybe their marketing team is inexperienced and none of them own pets, or want to poke at bleeding heart “pet parents”? But this scenario seems a lot more like the publicity stunts that GoDaddy has been known to pull. Too much money is involved for something like that to get past any team, no matter how ill-advised or inexperienced they might be and probably aren’t.

I think they knew exactly what they were doing.

This is what I feel is the most likely scenario. I do give their marketing team enough credit to not push this one out the door as “humor” or “funny”. I think they went with “shocking” and “want free airtime”, of the PETA variety. Lets create a media fire storm and get all these people taking about GoDaddy! No news is bad news! We’ll come out on top in the end when we pull the ad! Let’s get the free speech advocates on our side! Perhaps: Animal lovers will go overboard and turn things back in our favor!

But I think what really happened here was something like this:

For any corporation to have anything ready so quickly is absolutely not possible. I’ve worked with marketing (actually, I worked with a different marketing team in the very same towers that GoDaddy is headquartered in 1 mile from my home), and – at least what I saw – even simple tasks take longer than that. Heck, an email chain about an email takes longer. A super bowl ad? No way.

So: What fantastic media attention… for free! We’ve been played here, I think, by a very untrustworthy company.

In sum: Let’s not support a company that plays its customers

I wish I could say I was pulling accounts from GoDaddy and “hitting them where it hurts”, but I haven’t been a customer of theirs for a long time because their service is terrible and I hated the idea of supporting their former CEO (his horrific hobbies were old news). There are so many better options out there, and they’ve given bad service for a long time, so there is no reason to give them your dollars and domains.

But what I can do is make sure they stay in the spotlight for all the wrong reasons. OK, I’m not much of a spotlight – more of a nightlight in spitting distance of their headquarters – but here’s what little I can offer to adding the “exposure” they truly deserve.