You are here: Home / Dog Training and Behavior / Dog anxiety / How to deal with surrendering a dog with extreme behavior problems? My thoughts. 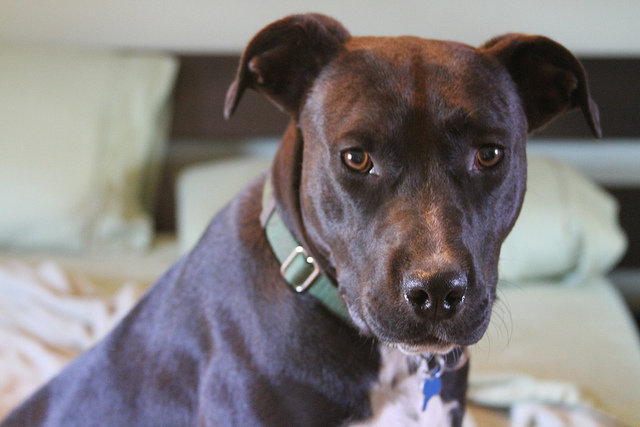 Extreme behavior problems often lead to extreme resolutions: surrendering a dog at a shelter, rehoming, and some even decide to have a veterinarian kill their dog. It’s a complicated issue, especially in the case of aggression. Should a dog who is known to bite humans be rehomed to someone else? What if a child was hurt or killed a result? Is the original owner, shelter, or rescue liable for that (oftentimes, yes – or at least, a complex case arises).

But what about when people aren’t at risk, and it’s something like Separation Anxiety? How do you know when “everything” has been tried, and then what do you do when you’re simply not the right home for your dog? Do you keep going on, or try something else? It’s a complicated question, and I haven’t covered all of the “answers” (if there is even such a thing) in the following Q&A.

This question and my answer originally appeared on the Pet360 forums.

The question: How do I deal with surrendering my dog?

I have talked about my dog Watson on the separation anxiety forum. Today when I got home like I have since I moved a few months ago to destruction inside the crate. He cannot be left out because he is also destructive. After a year and a half of meds and other training exercises I am at my end and have come to the realization that there has to be someone else who has more time to give to him so that he can be a well adjusted member of the family I know he can be.
Does anyone have any suggestions on how to deal with this process? I know that this is what is best but am still having a hard time.

One thing that pops out is the crate. I have heard from a behaviorist that many SA dogs do much worse in a crate, and that it can (in some of these cases) make the issue worse. Imagine only wanting to run away, but being tied up in a straight jacket. I understand that there is destruction, but I wonder if an incredibly “proofed” room with music, DAP diffusers, and many other calming elements and completely mask all sound ouside the room might help the situation? It’s a larger space but not tight confinement like a crate. Have you worked with a professional behaviorist experienced in SA (ie: not just a vet or trainer)? It is a very difficult situation, but I’ve learnt about so many creative solutions professionals have tried with sometimes significant levels of success. And a lot of it was very gradual progress, doing things like completely “covering up” the sounds and behaviors of leaving the house so the dog actually thinks you’re home the entire time but he’s simply chilling in a different room (you do this then leave for short then longer periods). I totally understand you may have tried this too, but just thought I’d throw it out there in case.

Regarding surrendering, if it must happen (and yes, I certainly acknowledge sometimes it does after everything has been tried and fails), I would personally try to rehome Watson yourself to know he’s going to a good, appropriate home that could address what he needs. Do know that most rescues are full, and that many, many shelters in the USA do not deal with behavior issues with anything other than a needle, especially rather extreme unresolved ones like this. Many shelters also don’t emphasize this, will tell folks otherwise, but there are very few shelters who will take on extreme behavior cases. In other words, a “no kill” will just don’t kill “adoptable” dogs, and the definition about what that means can potentially be pretty lose – I volunteered at one who had an amazing community reputation and would kill for adjustable behavior problems, as it’s a judgment call – sometimes of just one individual who may or may not have a lot of background in behavior. Also many dogs behave very differently in the shelter environment, and this can affect their chances of becoming “adoptable”. I’d be concered about this because Watson already has issues with confinement.

I don’t like bringing up extremes, and you very well may know this already, but it’s better to know beforehand in my opinion than find out the worst afterwards (which would be much more difficult to deal with). When I volunteered I remember many people being quite surprised about these things, and it’s good to know more about what Watson could face in order to make a final decision that can be dealt with well.

So the best way to deal with this process, I think, is to rehome yourself after knowing everything has been tried. For the rehoming process, there are many great ways to run a campaign for Watson – social media, flyers, ads are great ones for this. You could also partner with rescues to “foster” your own dog with them until a home is found – this means they can help you advertise Watson on Petfinder (create a listing for him), and you can go to adoption events to help look for a new home. It might take awhile because you are looking for a very particular kind of home and person who can work with this issue. This is why working with a professional can aid in this process, as you can have their notes about what has been tried, hasn’t worked, and any suggestions for what a different home could do. I, as an adopter, would want that kind of information and I believe fully that it would greatly increase your chances at finding a new home. At any rate, if you do get to this point I would recommend trying everything you can to avoid a shelter. After volunteering in so many of them I wouldn’t have a good suggestion about how to deal with that…

One more note is in any write-up about your pup to stress the positives. Be honest about the problem, but sandwich it with all the things that makes your dog wonderful and the kind of home that will be a perfect match (don’t focus on the negative).

Then you know you tried absolutely every training protocol with a professional behaviorist in advance, and helped search and find an appropriate home where Watson has a good chance at success. Every dog isn’t perfect for every home, and often there is a better match, but to just make sure that the good match is where he heads to. Then you’re not giving up, you’re simply giving Watson what he needs to be happy. I think that would be the best way to deal with the difficult scenario. Just my 0.02.

And as a disclaimer, I’m only speaking from personal experience in the California shelter system and related advocacy. I do know it’s similar in many other states, but not every shelter is the same (some better, some much worse). And just one last stress – it’s personal opinion, and doesn’t reflect the thoughts or opinions of any other people or business entity.