You are here: Home / Dog Sports & Activities / Adventures / Bark in the Park adventures with sheep and one frustrated border collie #AdventureDogChat

This weekend the big adventure was attending a local event, Bark in the Park, as a vendor for my business Stylish Canine. The event is in the center of San Jose, California and lasts all day long. But what does this have to do with dog adventures? Well, there are hundreds if not thousands of dogs who attend (they estimate 10,000 people and it seemed like every family there had at least one dog with them!). What felt like hundreds of booths. There are demos for flyball, herding, and more. And one of those… herding… is where our adventure comes in.

So here was the highlight of the day for me (and no, it wasn’t the dog fight a few booths over that started off the day). I was wandering over to see another member of the SFEtsy team (an Etsy thing) at her booth, Curry n Pepper, and purchase some of her amazing dog treats. I was milling about and hear a commotion, and turn to see the following burst through a crowd of people:

The sheep took off between a couple booths, ran down a dirt road behind them, then looped through the booths again to run back through the crowds of people and barking dogs. And who was on the case?

One border collie, who kept all four of those sheep together and didn’t bat an eye at all the chaos that was ensuing.

My jaw was on the ground watching that border collie work those sheep no matter where they went. Bystanders were trying to pet them, some people were trying to catch them, but that border collie kept the sheep together despite everything that was going on. I wandered off when the sheep and dog were largely out of sight, gosh knows where (running towards a street at that point… sigh).

Half an hour later

I had returned to my booth by then, but heard another commotion much later on. I turn to see this (and quickly grabbed my camera this time):

That’s right, the sheep were still loose! Some (different) bystanders were trying to catch the sheep, as some other people were yelling at them to stop.

The border collie was still on it, although don’t ask me what that guy is doing!

But I actually saw the point at which this dog decided it was a lost cause, shrugged, turned around, and wandered off:

Whew, what an adventure!

And where was our adventure dog?

He wishes he was flying, but he was grounded at home waiting for us to return.

Check back later this week to learn more about ayurveda for pets and the treats I got at the Curry n Pepper booth! Not only will you learn about what this is, you’ll also find out what kind of dog Mort is. I bet you’ll never guess! 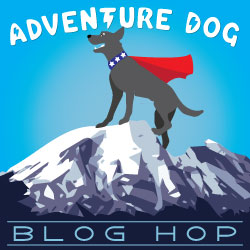 How to join the Blog Hop:
Here are the details on how to join the hop. For more information about this blog hop, and blog hops in general, see our page about the Adventure Dog Blog Hop.