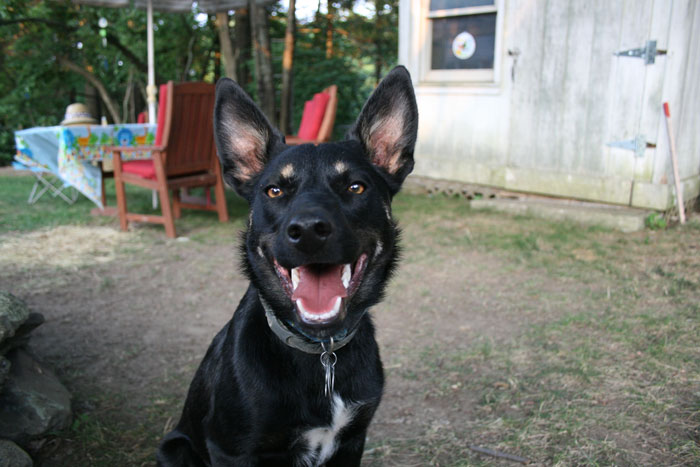 In this interview, we meet two dogs who enjoy agility and flyball. Captain Awesome and Blazer and human training partner Jennifer, who fell in love with dog sports while watching her dogs have so much fun while learning new things!

Tell me a bit about yourself and your dogs!

My name is Jennifer, and I live in southern New Hampshire. Captain Awesome (German Shepherd/Airedale Terrier/Schipperke mix) is 5 (6 in June), and Blazer (Australian Kelpie) is 2. We have been participating in flyball since April 2012.

Captain is a nervous nellie, but an extremely sweet and obedient boy. He loves jumping and running and preventing one of our cats from running away.

Blazer is extremely fearful and sound sensitive, and we have been actively working with a trainer for two years. He herds frisbees any chance he gets.

How and why did you get started in dog sports?

We had tried out agility when Captain Awesome was a puppy. Captain loved all the different tasks, but only wanted to perform one a week. One week, he’d love the tire, the next, he’d want to run up and down the A-frame. While it helped him cultivate confidence, it wasn’t something he seemed like competing in.

When Blazer came into our lives, we also tried agility. Blazer was so sound sensitive that we could barely get through a practice anytime someone used the seesaw. Being a kelpie, I thought he’d love treibball, but I couldn’t find any active practices or classes within an hour and a half of our home. That left flyball. Outside of agility, it can be tough to find dog sports around here without traveling a distance. We were lucky enough to find a flyball team that was about an hour away. Since then, the team merged with another, and now our practices are local.

How long did it take to train your boys for competition?

I think any flyball person will tell you… it’s not a fast process. There are a lot of steps to learn.

We started in April 2012, and the boys still don’t have the routine down. We are at the point where they are very, very close. Captain accidentally completed the full routine when he got so excited after hitting the box and catching the ball (part of his reward is running the jumps, since he loves it so much). But it hasn’t clicked yet. Part of it is the sporadic nature of our practices. We often only practice once a month or two, so they’re not able to reinforce everything at a steady pace. Part of it is fear. It took time for Blazer to get comfortable with the practice spaces, noises, and the people. It took Captain time to get used to having random people hold onto him.

For us, it’s just about letting them have fun. We don’t have any goals, and we don’t expect to be able to compete (if at all) for the next year or two.

What are competitions or tournaments like for you, Blazer, and Captain Awesome?

We’ve been bringing the boys to competitions to desensitize and counter-condition them to the noise and activity. That’s part of the reason we don’t expect them to compete (though it’s not out of the question). Many flyball people bring earplugs because it’s loud. No, LOUD. Screaming, yelling, whistling, buzzing, barking. Pandemonium. The boys can generally only withstand about ten to twenty minutes in a competition area before they’re fried. The sound alone is our biggest hurdle. We’ve gotten them to the point where they accept food, and that’s good. But we’ve got a ways to go.

How has competing with your dog changed your relationship with them?

How do you keep Blazer and Captain healthy for competing?

Our dogs have sensitive stomachs, so we make sure we only offer them two types of one-ingredient treats like homemade chicken jerky. Blazer is very toy-motivated, so we try to stick to the toys.

Do you have any tips for someone interested in or just starting out with a sport?

I know a lot of people who don’t take the time; they’ll go to one practice every three months. We’re doing this for them, so we make the time. Even if I’m not feeling great, I go to practice because they’re missing out if we don’t. They might not know, but I do, and that’s what pushes me forward.

Do your dogs have any websites we should follow?

Blazer has his own blog – http://www.lunatunahead.com/pawtistic/. I go through our training experiences in it.

This is the first interview in a new series that highlights dogs who love dog sports (at any level), and their human partners. If you are interested in being interviewed for this series, you can find and submit the interview questions from this page.

Photos courtesy of the interviewee, Jennifer.

We are participating in the FitDog Friday Blog Hop brought to you by SlimDoggy, Peggy’s Pet Place and To Dog With Love. Check out the posts below for more great content about fit and active dogs!