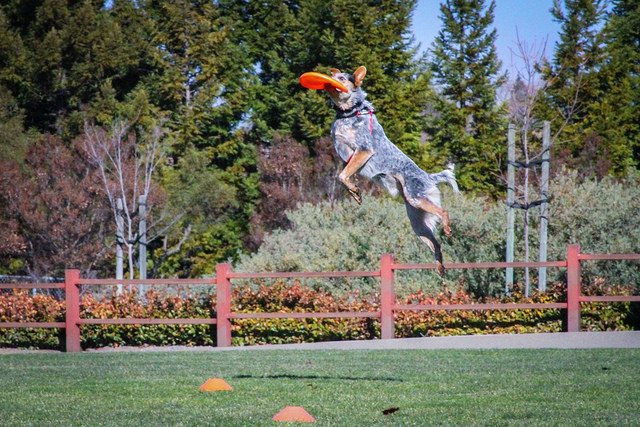 Awhile ago, study results were released proving that dogs like interactive toys best. This study probably doesn’t highlight anything that should surprise you. Dogs like to interact with some toys, whether or not a human is involved. A toy that a dog cannot interact with with is boring. That same toy becomes interesting if a human gets involved. Yes, this is probably common sense for most! Something that is interesting… is interesting! You don’t need to be a dog to know that.

So, a toy needs to be interactive, either on it’s own (the dog interacting directly with the toy), or as a conduit between a dog and his human. Lets consider some different types of interactive toys in these categories, and what makes them interesting to a dog. Then lets consider whether it’s better for a toy to be interactive on its own, or not!

Dog interacting with a toy on his own

Dog interacting with a toy and a human

This is pretty straight forward: Balls, discs, sticks, tug toys, and more are interactive primarily when a human gets involved. In other words, these types of toys are usually boring to a dog on its own – limited texture, typically stationary – unless a human makes them engaging and interactive. There are rare occasions when a dog, usually one quite toy obsessed, will figure out a way to make such a toy interactive. He might drop a ball down a flight of stairs then run to chase it, or balance a ball between his two paws and hold it in the air. Here are a few examples of how a human is needed to make a toy interactive:


* Flirt pole: Think of a giant cat toy, but for dogs. Some kind of toy is on the end of a stick, and a human will whirl it around and trigger a dog’s natural prey drive. The dog chases the toy on the end of a stick, and the human can occassionally reward the dog by letting him catch it. This could possibly be modified so it was interactive without a human, too. Might not be quite as fun though!

* Volley dog: A very lightweight ball can be rolled around by a dog (above, on his own), or much more fun is when a human tosses it in the air for the dog to volley it off of his nose back into the air. Yeah, I just wanted to add this crazy game because Mort looks and acts pretty insane when he does this.
* Chuck-it and disc alternatives: Most of you have probably seen the “chuck it” (or alternative brands) of a long pole you can scoop a tennis ball into and use it to throw the ball farther. There are even disc-based versions of this device.
* Lure course: A toy or other object (sometimes a plastic bag) is tied to a string, and pulled along a course while the dog chases after it. The human controls the speed an interaction of the lured object to make it most engaging for the dog. Traditionally used to test sighthounds (think of this being pulled around a race track), it is now a fun activity for dogs of any breed. Many dogs sort out how to “play” this game instantly, as their natural prey drive kicks in and they chase after the plastic bag immediately. For other dogs, even those with prey drive, they’ll wonder why any dog would want to chase after a bag instead of a squirrel.

Alright, this list could go on-and-on. What are your favorite toys that are made for interacting directly with your dog? My dogs aren’t huge tuggers – any favorite tug toys?

So what’s better? The bottom line for interactive dog toys

Interactive dog toys (such as food games or mechanical devices) can be a great addition to your dogs day, but do strive to interact with your dog and a toy as much as possible for the following reasons:
* You develop a better relationship with your dog.
* Your dog looks to you and learns how to best interact with toys.
* You can use the toy drive to train your dog, and use the toys as training tools when necessary or desired.
* You supervise and “control” the activity, and can stop trouble before it occurs (such as your dog creating interactivity by chewing apart and consuming a toy!)