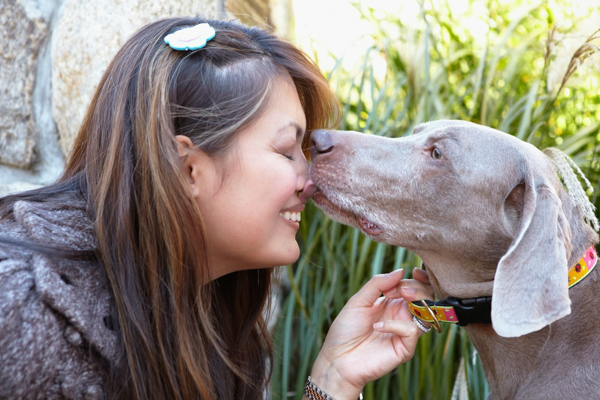 This is a guest post contributed by Sherryl Mascarinas. It was originally posted at The Mascarinas Five blog on January 25th, 2014.

Almost two weeks ago today, our beloved Weimaraner, our sweet girl Wendy, passed away. She was two months shy of her 12th birthday. I would give anything to once again run my fingers on her soft fur, kiss her long, fuzzy ears I’ve kissed hundreds of times, nestle my head on her furry neck. I miss her. We all do. The pain is so raw, the void in our hearts so big. How do I even begin to express what it meant to share my life with this dog for the last twelve years?

Wendy came into our lives in February 2003 when she was 10 months old. My husband Chris (then my fiancé), and I just lost our first dog together, a Doberman Pinscher named Mickey, the year before and were not looking for another dog. Our friends told us about a young dog in need of a new home. Wendy’s current owners were not prepared to own such a large dog and could not keep her. So we took her in. It was one of the best decisions we ever made.

She brought so much joy and laughter. Her fear of birds developed from puppyhood when she tried to “pick up” a baby bird that fell out of its nest. Terrified at first, the baby bird tried to get away from her, shuffling from side to side. Finally realizing that Wendy was not a threat, but rather a nuisance, it puffed up its chest feathers, fluffed its wings and attacked her by pecking on her nose. Wendy ran away crying, her tail between her legs.

She was the sweetest puppy. She was so kind and loving. A friend’s dog, a viszla named Mishka, came to stay with us for a week while she went on vacation. Wendy made room on her favorite fuzzy blanket (the only bed that she would sleep in) for Mishka and her to sleep together. They ate together, walked together, played together. When it was time for Mishka to go home, Wendy watched her leave, her tail upright and wagging slowly, as if she had just fulfilled her role as a good hostess.

She loved to play with other dogs – then being an “only child”, I spoiled her by taking her to the dog park almost daily. I loved those days – just Wendy and I having fun without a care in the world.

When the kids were born, Wendy immediately welcomed them. Wendy was a wonderful “big sister” – so loving, kind, attentive and so sweet. In all the years she had to share the house with the kids, not once has she growled at them or bared her teeth at them. Not even when the kids would dip their fingers in her food bowl while she was eating, take her toys from her mouth by force, not even when my two year old decided to body slam into her while she was sleeping. She loved those kids beyond words and they loved her unconditionally back.

Wendy was diagnosed with diabetes a few months after she turned 10 and over the next year and a half, cataracts formed in her eyes that robbed her of most of her sight and recurring bladder infections would rob her of her dignity from having “accidents” around the house. But throughout all of that, because she loved us so much, she forced herself to stay – even when her poor, tired body was showing signs of age.

So after starting her dinner on a Wednesday night, I noticed that she has not touched her food, only her water. Wendy is not known to leave even one kibble in her bowl so I knew immediately that something was wrong. Then I saw her swollen belly, called the vet and rushed her to the animal ER immediately with my three children in tow. My husband was thankfully able to meet us there, having just arrived from a business trip. It was there that we learned that she indeed is suffering from bloat and the only treatment to reverse it was invasive surgery to untwist her stomach. We decided not to have our sweet girl go through that much pain. And so, we were forced to do the kindest, most unselfish thing we can do for her – put her down peacefully. We gathered the children, told them that Wendy needed to stay at the hospital and asked them to hug and kiss her goodnight, without telling them that it would be for the very last time. I too, said my goodbyes, having decided that my husband would be the one to stay with her during the process. Our sweet puppy grew her angel wings peacefully that night, while in the arms of her loving daddy.

My grief is a combination of guilt and overwhelming sadness. I am constantly asking myself – was I a good mommy to her? Did I make sure that she felt loved enough? Did I take care of her enough? It is in asking these questions that I realized that yes, I gave her the best possible life that I could give her. We all did. She was loved. Incredibly, incredibly loved. That thought gives me a little comfort.

I also realized, in Wendy’s passing, the beauty of life when shared with a dog. She made our days a little brighter, a little happier. This is how I would like to remember her. Wendy was a dog of little worry. She lived a life of ease – only asking for occasional hugs and kisses – which everyone happily obliged to.

Our girl has not been well the last few months. I know she relied on us to do the right thing when the time came. Only I didn’t expect the time to come suddenly, and too soon. But she is free now – of pain, of disease, of age. Wendy lived such a gentle and peaceful life – it is only befitting that she pass away the same way. Our hearts hurt that she is no longer with us but thankful for all that we’ve gained from her – thankful that she shared her life with us.

“If there ever comes a day when we can’t be together, keep me in your heart, I’ll stay there forever.” ~ Winnie the Pooh

Sherryl Mascarinas is the founder and designer of the web based accessories company, Lizzie, Izzie + James. She lives in CT with her husband and three children.
You can find her blog here.

This is an article that has been contributed to DOGthusiast.com from the dog community. It has been contributed by the author noted above, and reproduced here with their permission. If you are interested in submitting an article for consideration, please note that DOGthusiast.com now only accepts articles from other dog writers and subject matter experts.