You are here: Home / Fun dog stuff / Remembering Coconut – No wonder I chose Mort at the shelter: Throwback Thursday 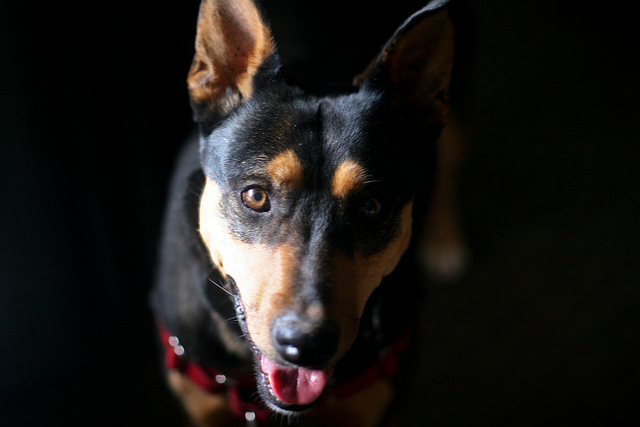 A previous Throwback Thursday, I went back to when we chose Mort at the shelter. Now lets check out this old post from when I visited my favorite dog at Best Friends Animal Society: Coconut.

I never noticed until 2 years after adopting Mort that I essentially chose a Coconut! Coconut was listed as a “doberman mix” – but she sure seems like pure Kelpie craziness in retrospect. They look similar, act similar, are… doppleganger dogs!

Coconut has since been adopted. She was transferred to a different shelter, and adopted from it. A happy ending.

So this old post has a bunch of photos and some video of my favorite Coconut (NutNut!) on our outing to Navajo Lake in Utah. A terrific, wonderful day. This post was originally posted here on July 9th, 2010

This was our last day volunteering at Best Friends, for this trip at least. We had decided, since we had such a great time with Goober at Najavo Lake, we wanted to do another outing there after a morning in the lodges – let another dog enjoy the chance to run around and swim on our long lead. I couldn’t get Miss Coconut out of my mind. She was one of my favorite sleepover dogs on my last trip, and I kept seeing her when I was walking Deja dogs past her run – her big ears and tilted head as I walked other dogs down the road near her run. I had barely spent time with her, so I requested her as our outing dog for this afternoon. But first, we had some Deja dogs to walk.

First I had the wonderful and energetic Lola Lu (and was taught the quickest way to get her harness on – if you harness her, it’s worthwhile to ask and will save you some time!), and Peter with her run-mate Tiki although we walked them separately. At one point, Tiki took a 30 second break, while Lola and I looked on. 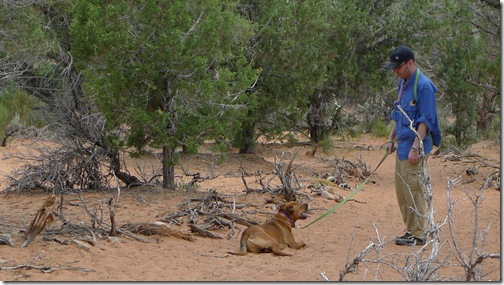 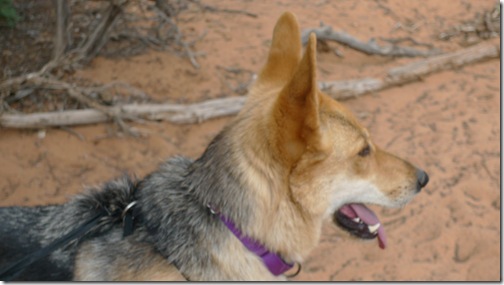 Then I walked Palmer and Peter took Shannon, like yesterday. Then I had sweet Purdy: 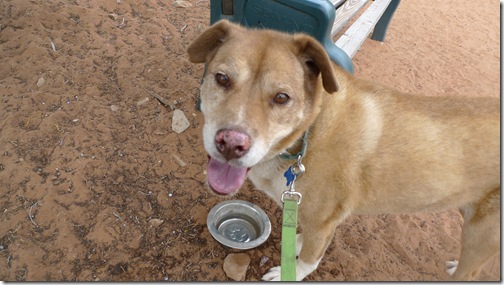 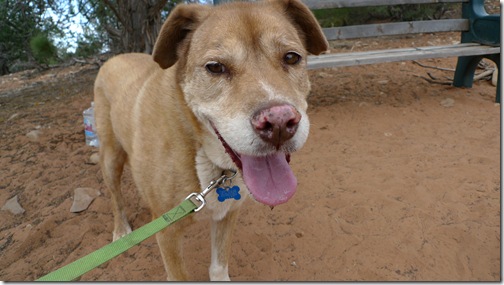 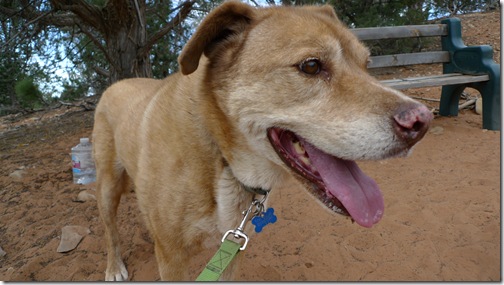 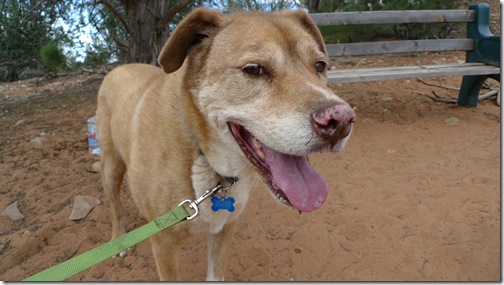 Next, Shocky. When Shocky left, she was a volunteer dog, but when we returned to her run she had turned into a Staff Only dog. Little did I know at the time of our walk that I would give her the last couple volunteer walks (today and yesterday), at least for awhile (I gave her a ton of kisses and love before I left, on behalf of us volunteers who love her). Shocky had started redirecting her dog aggression, I reckon something the training pros will be able to work on and resolve. I was told about this potential issue yesterday for our previous walk, and although redirection is obviously not a good thing, I immensely enjoyed the challenge of walking her. Shocky is an awesome dog, she is sweet as can be rolling on her back and giving a million kisses when you visit her. In fact, seconds after being angry at a dog, I redirect her attention and she’s all kisses and wags. I had never walked her before yesterday (I had only met her briefly when giving her food), and even with this issue I have fallen in love with this girl. Any non-home environments can be a bit tough on such social and attention loving personalities like Shocky, maybe it’s wearing on her and some extra training attention will help. Or a home where she can get the attention she seems to crave, which could perhaps solve everything (with some training too, of course). Not having a home is particularly rough on some dogs. I’m crossing my fingers. 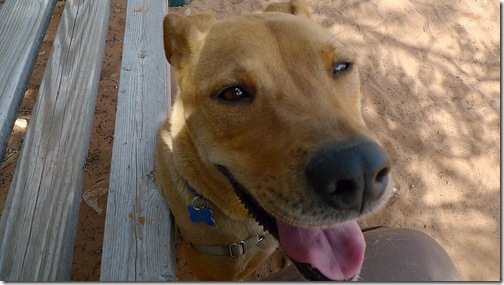 Then it was Tahiti’s turn: 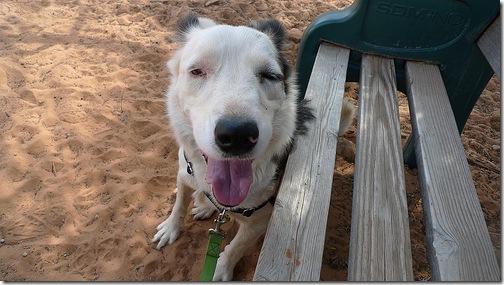 After Tahiti, it was time to pick up Coconut (aka NutNut). I fed her, checked her out at Headquarters, then we drove up to her Lodge to chauffer her out of Dogtown in style (well, in a dirty Prius).  [Note: Most photos are stuck on my big camera, will transfer when I return home]

She was very excited to get in the car and drive off, as you can see in the following video:

She did the same sort of thing when we arrived at my hotel room during our sleepover on my previous visit to BF.

We first stopped at Duck Creek Pond for a pit-stop, and then we were off to Navajo Lake (where we took Goober on an outing yeserday)! We had great weather when we arrived to the lake. Coconut was quick to run into the water, and hop around – like an excited kid.. or a rabbit! Her first experience with the deeper water seemed to surprise her a bit. In the first bit you can see her swim a little when she was in over her head.

Coconut wasn’t interested in chasing sticks to start off with – she just wanted to frolic in the water and run in circles in the grass. However, after a while she figured it was fun to chase sticks and return them to us – I believe the following video was her first “fetch” (you can see her playing in the water… I’m not sure what she’s doing… and then she spots the stick and runs with it back to shore).

She quickly got very good at fetching:

We walked around some of the lake – Coconut sniffing everything and enjoying the water. Then we found a tennis ball, and we started playing fetch with that instead. Coconut LOVED the tennis ball and was super excited as soon as we found it, running and hopping around, and rolling around with it in her mouth (pure NutNut!). We decided to use it in the deeper part of the lake, to see if she would swim after it a bit. She did!

And she even got quite fast at it – look at NutNut power through that water and take the ball right back to Peter:

Then it was time to head back to BF (NutNut loved being toweled off), and although she seemed to fight sleeping, she eventually curled up and slept most of the way back. We checked her in, and off we went. Coconut was this trip’s final dog – but it was a blast.

And after our last session, we checked out the caves that are near the Welcome Center (between the highway and the Welcome Center, on the left heading west). The caves are pretty neat to see, although we did see a bunch of snake tracks in the sand within the cave to the west – so beware. 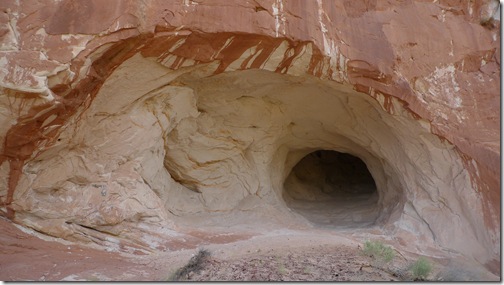 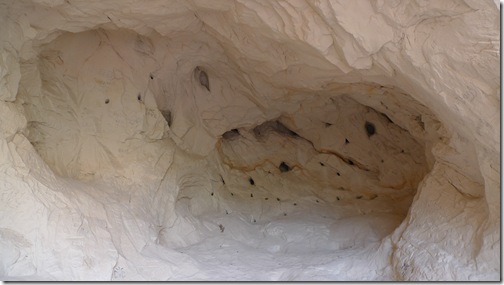 In the next one, you can see our Prius way down on the road, towards the left of the photo. 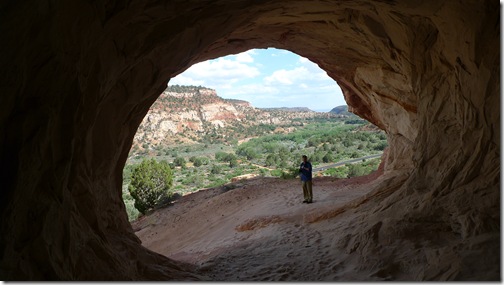 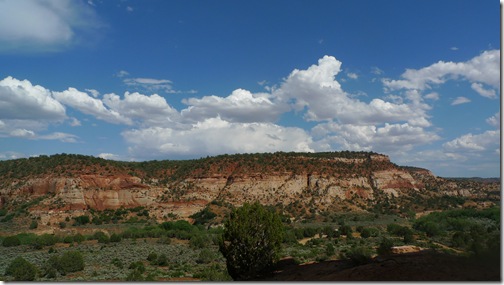 This is a blog hop hosted by Dolly the Doxie and DOGthusiast! Grab our badge and join the hop below! 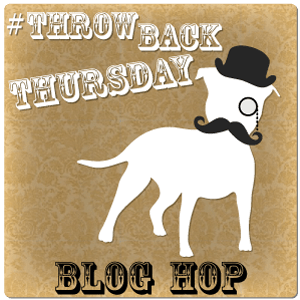